For the office where the working environment is comfortable and clean and the seasons are like spring, what many people can’t imagine is that there are many unknown health “killers” hidden in the workplace where they think that health and safety are up to standard. Office workers may not think that the place where we work every day is so “dirty.” The latest survey found that the number of bacteria on the desktop in the office is 400 times higher than the number of bacteria in the bathroom. Others such as telephones, faucets, door handles, etc., bacteria are “ubiquitous.”

The dirtiest spots in the office

The office kitchen is one of the dirtiest areas in the workplace, with the highest bacteria recordings on sink faucets and microwave and fridge handles.

“It’s an issue because its a huge cost to employers,” Dr Sander said.

According to the Workplace Wellness in Australia report, absenteeism is costing employers about $7 billion a year.

The Journal of Occupational and Environmental Medicine said 62 per cent more people in open-plan offices called in sick, compared to those in private offices.

Dr Sander said it became a bigger problem when people came to work while they were sick.

“They are not productive and are also making people sick around them,” she said.

Why are our desks so dirty? 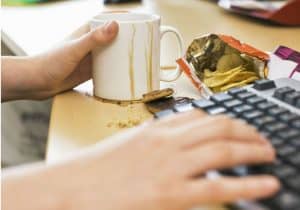 Dr Sander said people eating at their desks because they were too busy to take a break was a major contributor.

Leaving dirty cutlery, plates and cups on a desk can cause more bacteria to creep across your desk.

“The bin at the desk is designed to put paper in, it’s not designed for people eating fish curry for lunch and banana peels,” Dr Sander said.

“Food waste is not meant to be going in here and people are too lazy to walk back to the kitchen.”

Dr Sander said when it came to cleanliness, people in the office were slacker than they were at home.

“People in the office tend to think someone else is responsible for cleaning so people behave quite differently in the workplace,” she said.

She said workers should also clean desks, keyboards, phones and their computer mouse with sanitisation wipes.